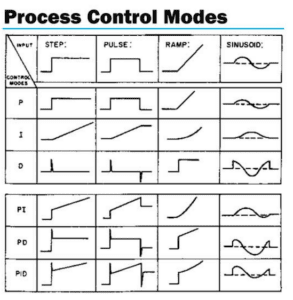 Most industrial processes require that certain variables such as temperature, flow, level or pressure, remain at or near some reference value (setpoint). Closed-loop control is used to achieve this. The process controller looks at a signal representing the process value, compares it to the desired setpoint and acts on the process to minimize the difference (error). The method used by the controller to correct the error is the control mode. The four most popular control modes are on/off, proportional, integral and derivative.

Control Modes
On /off control activates an output until the measured value reaches the reference value. A common example is the household thermostat. No control action takes place until the measured value deviates from the setpoint by a minimum amount (deadband). The output then goes from full off to full-on, turning off again when the setpoint is reached. While simple and low cost, this mode of control has a tendency to overshoot the desired value. A digital panel meter with relay output and adjustable setpoint can be used for on-off process control.

A more refined control method is proportional control. Here the difference between the setpoint and measured value generates a continuous, linear control output. The control gain K sets the system response as a function of time:

The bias term creates a non-zero output when the error term is driven to zero. This allows bi-directional control. The proportional band is the span of the measured variable that causes a full-range output. 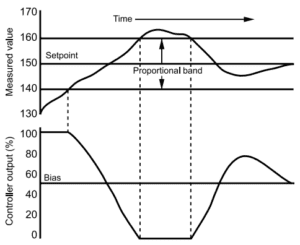 The higher the gain, the more the output will change for a given change in measurement or setpoint. High K (narrowband) provides more precise control but can create stability problems. Low K (wideband) controls over a wider input span but may be slower to respond. In proportional control, if system loading requires a shift in operating point, a difference between the measurement and setpoint will exist at equilibrium. The higher the system gain, the lower the offset will be for a given load change. 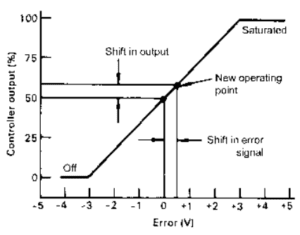 Although most PID controllers use proportional outputs, PID control can also be used with on/off outputs by incorporating duty cycle modulation. For each time interval (cycle time), the controller adjusts the on-time in response to the control signal magnitude. Since this generates frequent on/off operations, solid-state outputs are recommended over mechanical relays.

Tuning
Tuning is a critical but often confusing aspect of proper controller application. Many reference books and on-line forums are dedicated to tuning issues. Tuning can be optimized for load changes, setpoint changes or other factors. Open-loop tuning involves breaking the feedback path and characterizing the system response. Closed-loop characterization can be done with the feedback loop intact, by introducing a known disturbance and monitoring the response. The controller can then be manually adjusted for the signal ranges, time constants and delays of the process. This can be a complex and lengthy task. Fortunately, controllers often include automatic tuning capabilities to learn a process and set the appropriate control loop parameters.

Signal Conditioning
Many process controllers can be connected directly to the process sensor, such as a thermocouple or RTD. In some cases, an additional transducer or signal conditioner is required to convert the physical parameter to an electrical signal that can be handled by the controller. Many of the new ‘smart’ sensors include this signal conditioning, eliminating the need for an additional module. Transducers are also needed to convert some electrical parameters, such as AC power, into a signal compatible with the controller’s input.