The frictionless, shock-proof, taut-band suspension system has demonstrated superiority over the pivot-and-jewel mechanism in all types of analog panel meters. 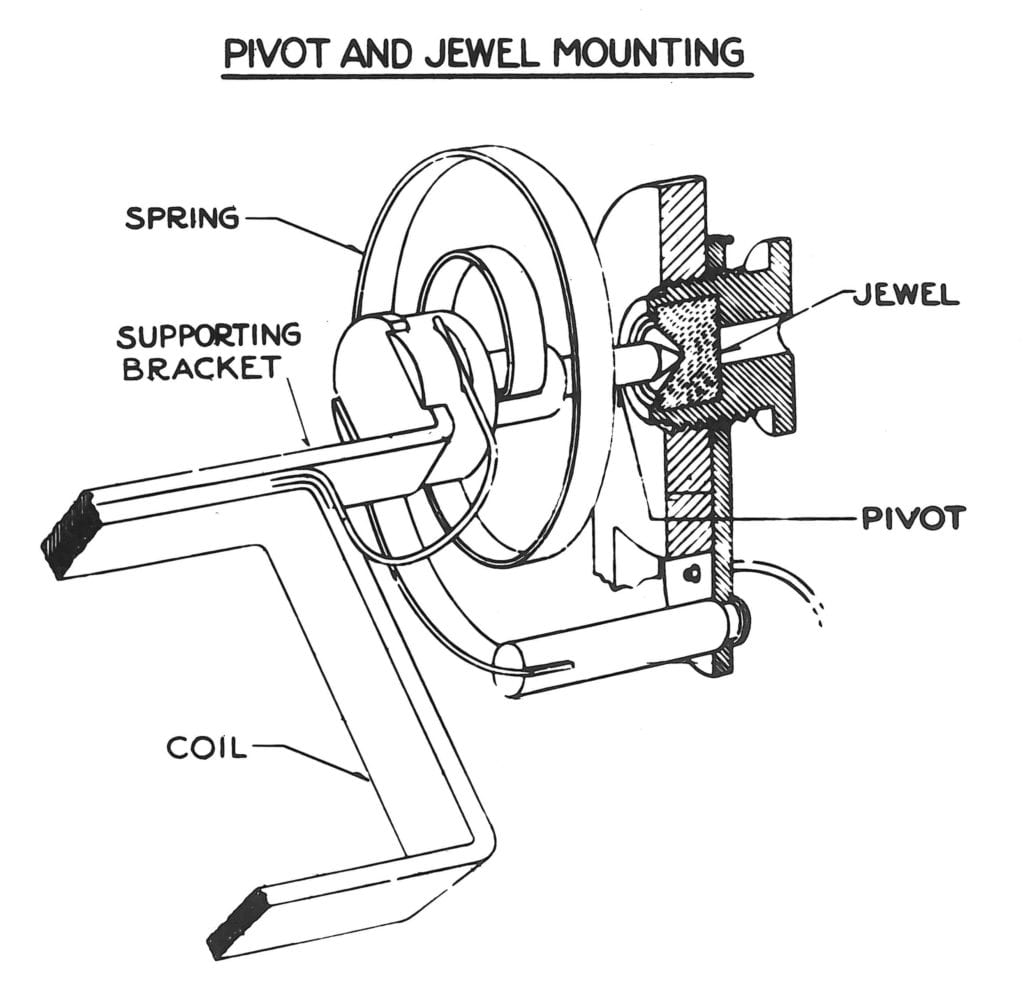 Prior to 1950, manufacturers supplied meters for industrial applications using pivot and V-jewel bearings with spiral control springs. However, experience with these meters in electric utility and industrial control panels demonstrated a need for improvements in sustained accuracy, maintenance costs, and environmental immunity. In 1954, a European manufacturer introduced a switchboard instrument with a taut-band suspension system that showed the ability to withstand repetitive shocks.

Over the next several years, Westinghouse in the US refined the taut-band principle, introducing circular-scale DC meters in 1958 that had: 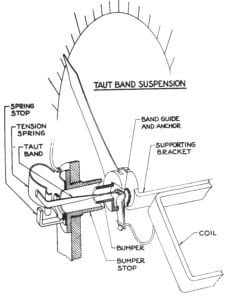 Pivot-and-jewel bearings and the control spring have always been major sources of meter trouble, requiring frequent maintenance or repair. An estimated 90% of instrument repairs involve these components. This problem persists even though the manufacture of the parts has been refined to produce very hard, highly polished contact pivots. Originally, precious stones such as sapphires were used for the bearings, providing a very low friction coefficient (hence the name ‘jewel’). Now hardened glass or ceramic is the preferred material.

Material limitations require a compromise between an acceptable amount of bearing friction and longevity of the bearing system. For a mechanism to deflect to the true reading with the desired repeatability, bearing friction must be minimized by reducing the pivot radius to the smallest possible dimension. However, as pivot radius is reduced, load on the pivot bearing surface increases. This loading will ultimately exceed the elastic limit of available materials, causing the pivot to deform and wear away, particularly under vibration or shock conditions. Thus, from the standpoint of bearing life, it is desirable to provide as large a pivot radius as possible.

The compromise generally followed in instrument design can result in a static pivot loading greater than 50 tons per square inch. Under impact conditions, the loading exceeds the material strength, so the pivot surface in contact with the jewel must flatten or deform to provide a contact area sufficient to support the load. The resulting pivot proportions are greater than desirable from the standpoint of friction but smaller than desirable from the standpoint of bearing life. Consequently, it is necessary to develop a level of operating torque in the pivot-and-jewel mechanism to reduce the influence of bearing friction to an acceptable value. 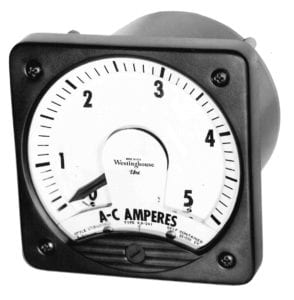 The taut-band mechanism is free of the inherent friction-versus-life limitations of pivot-and-jewel bearings. In the taut-band suspension, bearings and spiral springs are eliminated. Instead, the moving element is supported at each end by a short hair-like band of special high-strength alloy, drawn to rectangular cross-sections. In the Westinghouse design, bands are approximately 0.005″ wide by 0.0005″ thick, and they are controlled to less than five-millionths of an inch. The bands are permanently anchored to the moving element of the instrument and to U-shaped springs that maintain proper band tension. These also improve immunity to shock and vibration. The rectangular taut-bands provide restoring torque and also carry current to the moving coil. The Westinghouse taut-band suspension system minimizes moving-element weight to minimize inertia while providing maximum strength and stability. By reducing inertia, mass and operating torque, critical damping with little overshoot and rapid response time are achieved.

The major temperature influences on instrument accuracy are:

Voltmeters and millivoltmeters, which utilize a series resistor, can be made with a very low-temperature coefficient by using the TC of the resistor to compensate for the TC of the meter mechanism. However, perfect compensation is difficult to obtain. The surest way to reduce temperature influence is to reduce power input for the required operating torque.

Since taut-band mechanisms have no friction to overcome, the lower limit of operating torque is determined by the force required to overcome moving-element inertia and produce the desired damping and response time. A further consideration is the practical manufacturing limitation in maintaining the stability of moving-element mechanical balance to minimize position influence. The net result is a reduction in operating torque for taut-band systems to about one-third that required for pivot-and-jewel mechanisms. Reduced operating torque means fewer ampere-turns: only one-third as many turns are needed on the moving coil.

If full advantage is taken of the available winding space, the wire cross-sectional area can be tripled, thus reducing resistance (and therefore watt loss) to one-ninth. Thus, temperature rise and change in moving-coil resistance are much less for a taut-band system, and temperature influence is reduced significantly. The increased cross-sectional area also yields a large increase in overload capability, both momentary and sustained. For example, a 250°, 0-1 mA meter with taut-band construction can carry 150 mA continuously without damage. 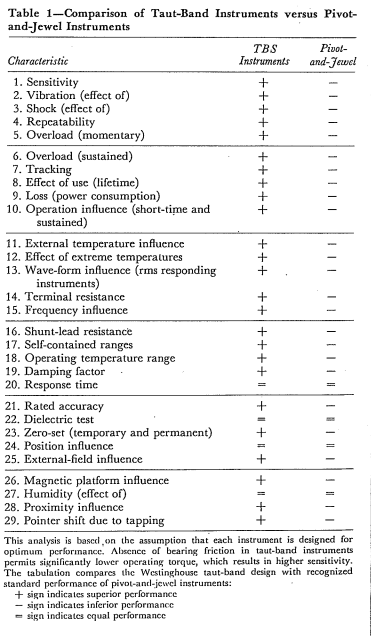 The reduced power consumption of taut-band meters makes possible a broader range of applications. A typical illustration is provided by the 1 mA DC, 250° meter. The pivot-and-jewel design has a moving-element resistance of 180 ohms and requires 0.18 mW for full-scale deflection. The equivalent taut-band meter has only 13 ohms resistance and power consumption of 0.013 mW. Thus, the current loss for a shunt-operated ammeter with taut-band suspension is only 1 mA, compared to more than 10 mA with a pivot-and-jewel mechanism. The reduced drop in the shunt leads makes it possible to use smaller lead wire or longer lead runs between the instrument and the shunt. The extremely low power consumption of the taut-band suspension also allows permanent-magnet moving-coil construction to be used in watt, var and frequency meters.

Taut-band meters have been exhaustively performance tested. In comparative life tests, no movement deterioration was encountered on the taut-band meters after 50 million full-scale oscillations. Conventional pivot-and-jewel meters often required bearing replacement after less than one million cycles. Taut-band meters also were found to be practically immune to damage from vibration and shock levels that made pivot-and-jewel instruments inoperable.

Particularly severe service conditions have demonstrated the stamina of the taut-band design in the field. One railroad reported that pivot-and-jewel ammeters on diesel locomotives required frequent repair, with overhaul and recalibration typically after eight months. Occasionally servicing was needed after only 30 days. Taut-band instruments in this same service for four years required calibration adjustment only twice, with no parts replacement.

In another example, a paper mill established a servicing routine where all instruments were checked, repaired, and adjusted twice a year. Each time it was necessary to replace or recalibrate a large percentage of the pivots and jewel meters. Taut-band instruments were installed, and after a year’s service, they all were operating smoothly and well within guaranteed accuracy.

Many pivot-and-jewel meters are now designed for low cost and do not perform as well as the earlier designs used for this comparison. For example, the smaller springs common in cost-reduced designs typically exhibit lower repeatability and poorer zero stability than prior models. Taut-band meters continue to provide superior performance in almost all applications. However, the manufacturing skills needed to produce a high-quality taut-band movement are scarce in the era of microelectronics. Fortunately, in 1984 Weschler Instruments purchased the Westinghouse meter business. Weschler continues to manufacture the proven Westinghouse design using the same methods and tooling. Weschler meter buyers today can expect the same performance and long life as Westinghouse users in the 1960s achieved.