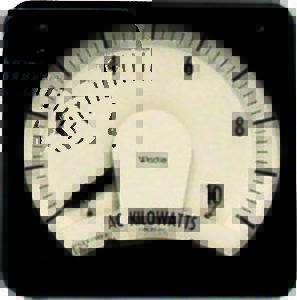 Measurements of process parameters have historically been accomplished by the analog panel meter (APM). Since 1819, when Oersted proved the existence of current in a wire by using a compass needle positioned next to a conductor, APMs have been the main indicator for all kinds of monitoring. To this day, the “moving magnet” principle is still in use and has changed little since its inception. Many sizes and styles of analog meters are available. Typical accuracy for an industrial-grade analog meter is 1-2% of full scale.

Digital Panel Meters
As processes evolved, a need arose for more accuracy in readings, especially to monitor and control process variables. This led to the advent of the digital panel meter (DPM).

Many inherent problems of APMs (such as limited resolution, parallax, moving parts and zero drift) were eliminated by a digital display. Processes could be monitored more precisely and even displayed in “engineering units” so operators would see actual readings. The DPMs also brought new capabilities not typically available in an analog panel meter – relay outputs, analog retransmission, and adjustable scaling, to name a few.

Controlling a process could be accomplished and any adjustments to the meter could match the change in the process. Consequently, less investment was needed because the same meter could be used when the application changed. However, the APM did not go away. In fact, APMs and DPMs were used together in many applications. There was still a need for the operators to see relative position using an APM, but when a process became critical, a DPM provided the more exact reading. This arrangement worked well – but another alternative was needed to offset new problems:

Evolution of the Bargraph Meter

A hybrid was developed that solved some of these problems. This hybrid was given the name ‘Bargraph’. The bargraph concept had been around for some time, but only in the form of an LED array of 50 or 100 segments. This new hybrid offered an optional digital display that gave the best of both worlds – relative position and high resolution. Bowmar (the inventor of the hand-held calculator) was the first company to truly capitalize on the LED bar and numeric display housed in one enclosure. This was done by designing a display board that included an LED array and a 4-digit display, and connecting it to analog and digital circuit boards.*

The idea of offering both types of displays was well received. However, the first units produced were offered in sizes other than what was typically used in the industry. The panel had to be modified or built to accommodate the bargraphs. This was not an issue in new applications but caused problems in retrofit situations.

As time went on, other manufacturers (such as Dixson, Triplett and International Instruments) developed their own designs to meet the demand for the new meter. In 1989, Weschler Instruments introduced the intelligent BarGraph Meter line, with drop-in replacements for the standard 6″ edgewise and 4½” switchboard-type analog meters. Bargraph meters became a true alternative for analog meters.

The intelligent bargraph meter allows the user to make changes in zero-point, scaling, alarm points and other parameters. It displayed in engineering units for both the digital display and bar array. Advances in component technology and added microprocessor power provided other capabilities not available previously on analog, digital or bargraph meters: 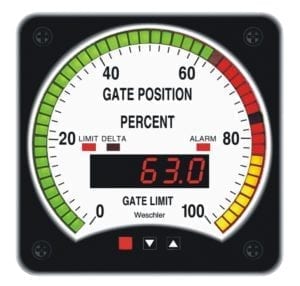 Further technology advances included the introduction of a tri-color bargraph that changes color depending on the signal level. This provides a quick indication of which signal in a panel is in an alarm condition and needs attention. Multiple colors can also be used in special applications, such as Weschler’s Gate Position Indicator, where the red color indicates the difference between two signals.

Most bargraph meters today include a numeric LED display. More sophisticated meters have an alpha-numeric display for enhanced message and data readout. The resolution of three or four digits is common for industrial processes, but five or six-digit resolution can be ordered for high-end applications. 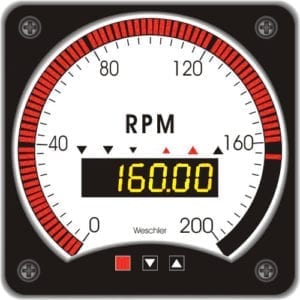 The latest bargraph meters include multiple input channels, real-time clock, data logging functions, and sophisticated control capability. They can be tied directly to a plant network. Rugged versions with sealed front panels and extra bright displays can be used outdoors in harsh environments. Today the role of the bargraph meter has expanded far beyond an analog meter replacement. A wide variety of sizes and configurations are available to fit many applications.

For information on the entire family of Weschler bargraph meters please see here.

*The Bowmar Bargraph line was acquired by Weschler Instruments in 1990.