Digital panel meters (or DPM) typically uses either an LCD (Liquid Crystal Display) or LED (Light-Emitting Diodes) to display information in an alphanumerical format. What are the differences between LCD’s and LED’s and how do you know which one to pick for your application? Read on to find out!

The Liquid Crystal Display (or LCD) is a form of visual display used in electronic devices in which a layer of a liquid crystal is sandwiched between two transparent electrodes. The application of an electric current to a small area of the layer alters the alignment of its molecules, which affects its reflectivity or its transmission of polarized light. Liquid crystals do not emit light directly. Instead, they use a backlight or reflector to produce images in color or monochrome.

Light-Emitting Diode (or LED) is a semiconductor light source that emits light when current flows through it. Electrons in the semiconductor recombine with electron holes, releasing energy in the form of photons. The color of the light is determined by the energy required for electrons to cross the bandgap of the semiconductor. 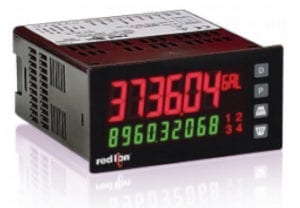 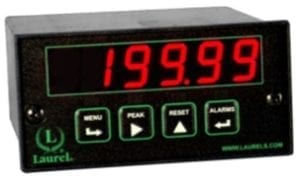 Differences:
While the underlying technology is the main difference between LCD’s and LED’s, there are other features that set these 2 apart from each other and could help to determine which one is right for your application.

Color: DPMs traditionally have a red, green or amber/yellow display. LEDs are also available in blue or white. Tri-color (RGB) LEDs can be used to create any color. The color of a transmissive LCD is determined by the backlight LED. Therefore, color-changing digital displays are more easily implemented with LCD technology. Some high-end DPMs provide a full-color graphic display. These use LCD technology similar to what is used in a color TV.

Brightness: The typical LED display is significantly brighter than an LCD. So viewing in a bright room or in a crowded instrument cluster favors LED. The LED’s higher brightness coupled with higher contrast gives enhance readability over LCDs. However, in direct sunlight, a reflective LCD is more visible.

Complexity: LCDs can be custom designed to show multiple readings, units and other annunciators in a small area.

Viewing Angle: LED displays to have a much wider viewing angle than LCDs. When viewing an LCD display, the image clarity will become diminished when viewing the display off to the side from the center point in either direction.

Temperature: LEDs are semiconductors, so they have a wide temperature range. Other components in the meter will determine its operating temperature limits. The chemical action in the LCD slows down at low temperatures (typically <0°C), so it may require a heater for these situations. Depending on the type of LCD, the maximum temperature of an LCD meter may also be more restricted than an LED meter.

Burn-In Issues: Neither LCD nor LED displays to have burn-in issues. That is, an image is “burned in” to the display if left unchanged for an extended time. Because of this, both types of displays are considered suitable for static images, which are typical with digital panel meters.

Life: Either display type will provide years of continuous operation. However, LCDs can degrade in high humidity due to an imperfect seal between the glass plates.

Price Point: Cost can favor either LCD or LED, depending on size, complexity, unit volume and other factors.

Both LCD and LED technologies have their own set of advantages and disadvantages. Be sure to consider all of these factors when deciding on the right type of display for your DPM application.

At Weschler Instruments, we carry a wide selection of digital panel meters from an assortment of manufacturers in both LCD and LED displays. We also recognize that every application is different and can sometimes require custom input ranges/scales. Contact us today with your needs and one of our highly qualified salespeople will assist you.